For many people, one of the defining garments of 16th century women’s clothing is the corset.  We see it in movies, tv shows, and assume that it must be under the gowns in portraits.  How else is such smoothness attained?

It’s also unfortunately a deterrent for many people who are otherwise interested in 16th century garb, thinking that a heavy, stiff, uncomfortable corset is required.

Part of this is due to our position looking backwards in time- the corset became so ubiquitous in the immediately following centuries that we just assume it’s in the 16th as well, as soon as gowns began to take a less natural and more rigid shape.

However, the more you look for corsets as a boned separate garment in the majority of the 16th century, the more they’re just…. not there.  Instead what you find are many, many references to ‘bodies’ or ‘petticoat bodies,’ or just references to items used to stiffen gown bodices.  These bodies are described as being stiffened with glue, buckram (glue soaked fabric), canvas, etc, but you don’t really see rigid boning.

Dame Joan Silvertoppe of Caid has a great post on her blog discussing this very point, with excellent citations regarding the various times garments are mentioned in wills, wardrobes, etc.  While I’m working on composing my own notes on this as well, hopefully for a future class, please look at her post if you care to read deeper about this in the meantime.

So, in the interests of science, I decided to see if I could achieve a satisfactorily smooth torso using only fitting, fabric, and thread.  I was somewhat dubious, as I’m unfortunately apple shaped and a DD/E cup.  I decided this would be a middle class kirtle- something I could wear with a waistcoat or doublet bodice over it for a quite late period look.

I started with The Tudor Tailor’s kirtle pattern, but it needed some serious changes to look even remotely flattering.  I decided to drop the front point about 10 centimeters- not quite as severe as those in Alcega, but it helps give the correct look and illusion of a more narrow waist, and draws the eye down.

After the pattern was ok enough to start fitting, I decided to first check and see how much support it was feasible to get from one layer of fabric alone.  Below are a few pics of one layer of heavy linen canvas, with mild tweaks for fitting (you can see the darts pinned to take in excess fabric, the edges rolled up where a bit needed to be trimmed off the waist, etc).  The fabric was a gift, so I don’t know the exact weight, but it’s pretty heavy.

Please ignore the slightly wonky laced up front- my lacing strips are cut off the side lacing of an old kirtle, and so too short- so I had to sew two onto each side, which meant the eyelet holes didn’t quite align, which meant wonkiness.  Ahem.

There’s some underbust wrinkling (which is period!), but the overall results were quite promising.  The one layer of canvas definitely supported and smoothed, and yet was extremely comfortable.

From the side, you can see a more rounded look, but this was quite common in middle class kirtles, and even in some nobility:

Bolstered by these results, I then turned my attention to what stiffening and other layers I would do.  The outer layer of fabric itself is pretty thick red wool, which will add its own stiffening, so I didn’t want many more layers – plus, I’d still need to sew eyelets through the dress, which would become increasingly difficult with each additional layer.  In addition, I’d like the dress to hopefully be wearable for most/all of the year, so keeping it somewhat light would boost its versatility.

I decided on one additional layer of a lighter cotton canvas canvas, stitched together to add additional stiffness.  As this is an experimental dress, I decided to machine sew it.

Here are the two canvas layers basted together to prevent shifting while stitching.  The very thick linen canvas is only in the bodice area itself, and trimmed away from seam allowance and the shoulder straps to reduce bulk.

And here they are after a whole lot of machine stitching, which is quite wobbly in some places as my machine decided now would be the perfect time to start misbehaving.  I debated exactly how much stitching to do, but eventually decided to mimic a pretty small pad stitch- while today we might blanch at doing this amount of hidden stitching by hand, I don’t think it would be unreasonable in period.  It also allowed me to attempt to remove one variable from the experiment- if the end result isn’t satisfactory, at least I will know it isn’t due to insufficient stitching of the layers. 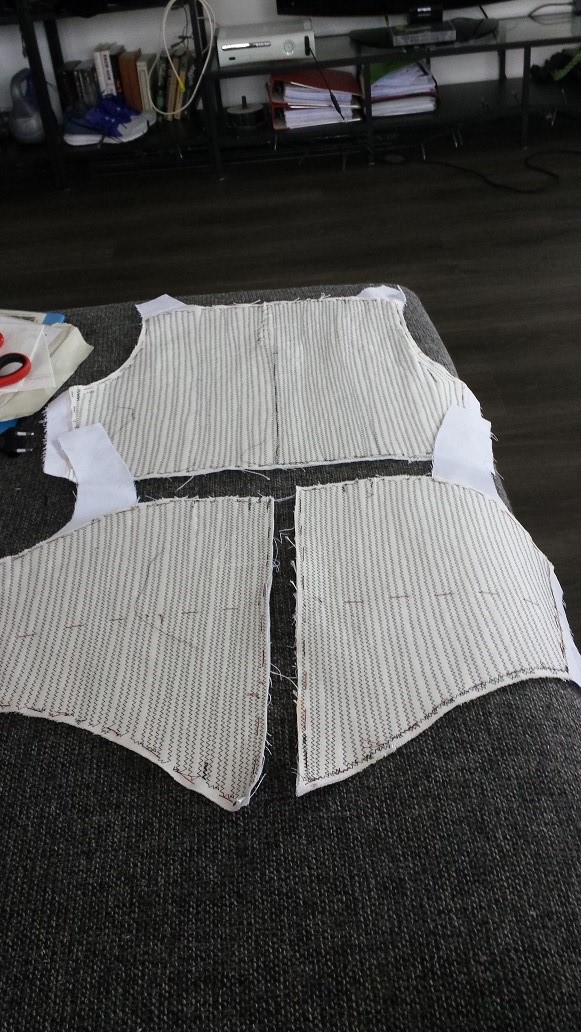 As an illustration of exactly how much stiffness the stitching added- this is a pic of the two bodice fronts, one stitched, one not, both balanced on the point of one finger.  As you can see, the rows of zigzag stitching have added a significant amount of stiffness to the bodice.

Next steps will be to cut and attach the bodice outer layer and lining (this will be done by hand), then attach skirt if all goes well.  I’m tempted to put a small facing in the front and stitch the eyelet holes before I sew in the lining, to give myself a last chance to make any necessary fitting adjustments/add extra stiffening where it might be required before I line it.  I’m also making a placard to hide the front lacing, which will allow me to wear the petticoat with open fronted gowns.  The experiment continues!